Entanglement lies at the heart of remarkable new technologies including quantum computation, quantum cryptography, secure communication, and high-precision measurements. At Indiana University, we are the first to explore the possibility of using entangled neutron beams to probe correlations in systems where entanglement of electrons play a role in establishing complex materials properties, such as unconventional superconductors and topological materials. We are also developing prototypes for the integration of fiber-optic sensor technologies incorporating quantum-entangled elements into an optic fiber for quantum communication, sensing, and simulation purposes. We are additionally making advances in quantum simulation using ion traps and other Atomic-Molecular-Optical (AMO)-physics-based technologies that may provide some of the most direct and precise ways to explore entanglement in complex systems.

We are among the world’s leaders in developing new technologies for producing entangled neutron beams. We are the first to explore the possibility of using such beams to probe correlations in materials where entanglement of electrons play a role in establishing complex materials properties. We are also developing new quantum dot-based and entangled photon probes. The entanglement of these probes will allow for a millionfold improvement of the mapping of the dark sector at short separations.

We are making advances in quantum simulation using ion traps and other Atomic-Molecular-Optical (AMO)-physics-based technologies. The ultimate goal of this research is to conduct quantum simulations with two-dimensional lattices of trapped ions or Rydberg atoms gases and thereby provide new insights into the behavior of materials or quantum chemical systems where quantum entanglement can play a significant role. These techniques will allow entangled quantum systems to be explored in ways that are fundamentally impossible with conventional computational techniques. 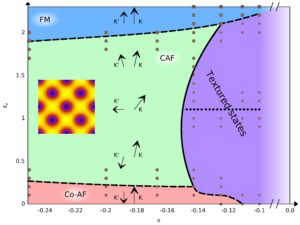 We are integrating advanced mathematical concepts with new quantum probes, such as entangled neutrons, to identify quantum materials with fractional topological excitations. In parallel, we are implementing a fiber-ion quantum machine that uses experimental information to better simulate those topological materials. We also investigate foundational issues, such as detection of fractional excitations (e.g., Majorana fermions) and engineering robust quantum memories.

We are working on integrated fiber-optic sensor technologies incorporating quantum-entangled elements into an optic fiber that has been engineered both laterally and longitudinally. 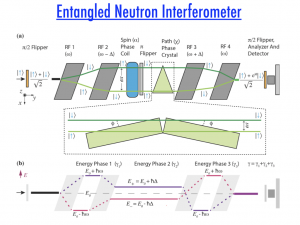 We are working to develop quantum sensors, devices that use quantum interference effects to achieve greatly enhanced measurement sensitivity. Our studies towards the development of a fully entangled interferometer would provide unprecedented sensitivity in quantum measurements.

We have performed pioneering work on the Mathematics of topological quantum computation and its implementation in prototype hardware. Much of the mathematics required for the second quantum revolution has been developed at Indiana University, and we are continuing this tradition to include frontier research in modular tensor categories and topological quantum field theories. We have also a long tradition of developing mathematics for quantum information processing with a focus on reasoning about the resources needed for quantum computation, the logic of entanglement, and its computational realization. 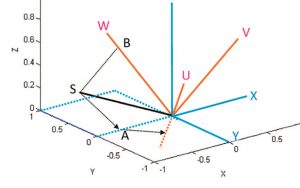 Applications of Quantum Probability Theory to Social and Behavioral Sciences 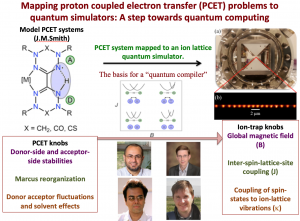 The coupled quantum-mechanical behavior of protons and electrons has a central role in many problems that are fundamental to human existence. Flavors of this kind of problem are seen in several critical areas including enzyme catalysis problems, electro-catalytic hydrogen evolution reaction problems, nitrogen fixation, carbon-dioxide reduction, artificial photosynthetic problems, and fuel cells. Yet, these problems are extremely challenging to solve, since these may involve, protons and electrons behaving quantum-mechanically, that is “tunneling”, and while doing so, becoming strongly coupled. In fact these problems can be mapped to what is considered by computer scientists as NP-hard problems, that is, problems that grow in a non-polynomial (or exponential) manner in complexity as the system size grows. A critical portion of this project involves the mapping of the quantum mechanical description of these complex catalysis problems to a specialized type of quantum computer, known as an ion-trap quantum simulator. This map will be used to develop quantum software and domain specific computing tools that are inspired by a popular and influential model of computation, known as the chemical abstract machine. Thus, this research project will design, build and validate the effectiveness of a general programming model by solving in it a variety of existing quantum algorithms and applying it to problems in chemical catalysis.